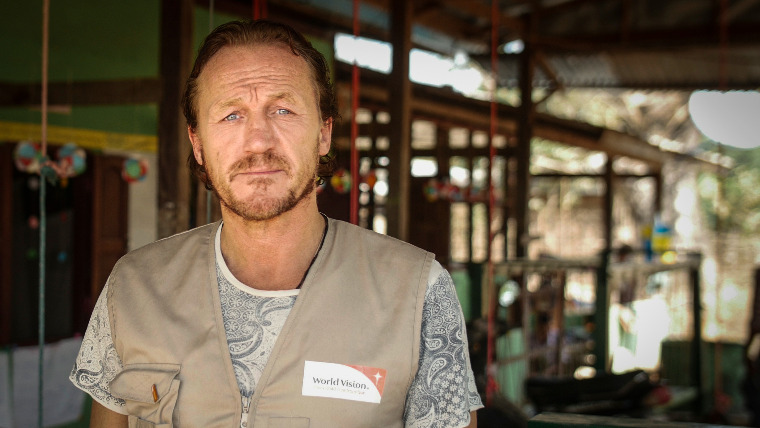 The conflict has forced more than 380,000 people over the border into neighbouring Bangladesh, according to the UN Refugee Agency (UNHCR).

Tens of thousands of children are caught up in violence that erupted on 25 August. Stories of abominable brutality have emerged from eyewitnesses, including our own field staff. Families were forced to seek shelter from crossfire and arson, and have sought safety on the border between Myanmar and Bangladesh.

Children in Myanmar are facing the most horrific situation imaginable. It’s heartbreaking that thousands have seen and experienced such violence and then been forced to flee their homes. We can and must do more to help them.

Flynn visited Myanmar earlier this year to see World Vision’s work in another part of the country with former child soldiers, a number of whom are still haunted by their conflict-ridden past.

“If we don’t stop the violence in Rakhine State, we risk a cycle of conflict that will see thousands more children lose their childhoods,” Flynn said. “It is unacceptable for the international community to turn away from those who need our help.”

International humanitarian aid has been restricted in the entire state of Rakhine. World Vision is still blocked from delivering food in the northern part of the state, and is seeking permission from authorities in both Myanmar and Bangladesh to respond to urgent needs of those who have fled violence.

World Vision global head of programming and emergency affairs Trihadi Saptoadi says: “Three weeks ago, we were reaching more than 20,000 people with food, including 7,000 young children. Today, we are feeding no-one.

“Horrific violence is preventing us from reaching those most in need. The conflict has displaced children, families and our own staff. Thousands of children are trapped in dangerous areas or desperately trying to reach safety.

“World Vision is ready to move in as soon as access is granted.”

World Vision has dramatically scaled up its emergency response to the COVID-19 pandemic, as the virus continues to spread rapidly around the world.
EMERGENCY WORK - PLEASE GIVE

Your donation will help children affected by emergencies