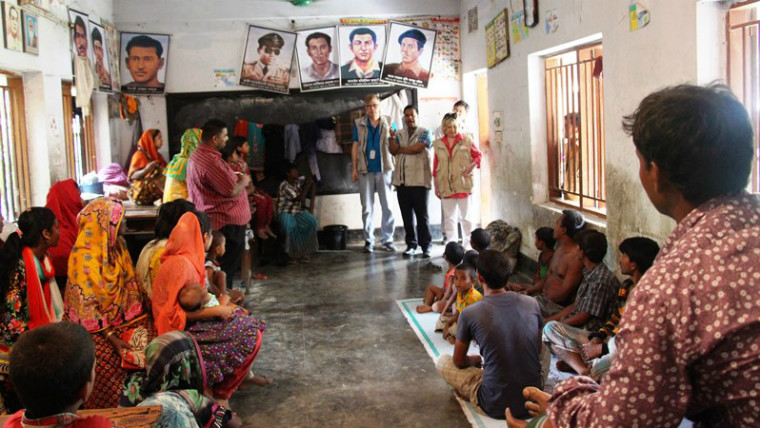 International children’s charity, World Vision has turned its offices into shelter for dozens of villagers in the flood and mudslide-affected Chittagong Hill Tracts region of Bangladesh.

Authorities in the country say 157 have people died after three days of torrential rains triggered flash floods and a series of landslides since Monday. Over 20 incidents of large-scale landslides and flooding were reported across the densely populated South Eastern hill districts – the worst hit being Rangamati. According to reports, the death toll may still rise further as many are still missing under tonnes of debris.

Al-Mamun Azad, World Vision Bangladesh’s Director of humanitarian and emergency affairs said: “In the area we work in some families who were affected by landslides have lost everything. We have taken in close to a hundred people into our offices as their homes have been inundated by flash floods. We know also that a further 1,600 people in Bandarban town alone, are currently living in 11 school buildings. This is just the tip of the iceberg: many are in dire need of shelter, food and clothing.

“We are also most saddened to learn that one World Vision-sponsored child has also died. So far however, all our staff have been thankfully marked safe and well, so we have begun making plans to respond and support the most affected,” Al Mamun explained.

As some telephone and transport links remain cut-off, Al Mamun says World Vision are concerned about the safety and welfare of children. World Vision is working closely with the Bangladesh government, the country’s army, UN agencies and other non-governmental organisations to map out the best response. World Vision’s emergency response teams have already been conducted rapid needs assessment exercises that include visiting homes of the most affected.

Storms, flash-floods and landslides frequently hit the delta nation of Bangladesh every rainy season. This year's rain is however the worst since 2007 when landslides killed 127 people.

Your donation will help children affected by emergencies