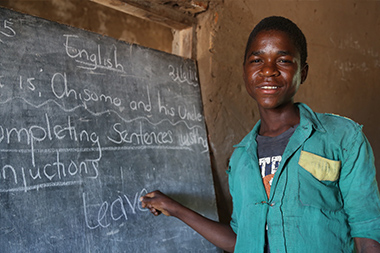 Donald Mogeni, World Vision UK's social accountability advisor said: "Addressing the challenges of tax havens was never going to be a walk in the park, and the post summit media narrative has predictably made #PanamaPapers the chief reference point. We believe that the UK and the leaders in London have made commendable in making commitments on financial disclosures although for us in the aid sector we feel the course of discussions had too heavy a focus on the private sector than the function of charities and the civil society."

"World Vision welcomes the summit's resolution to launch of an Anti-Corruption Innovation Hub, which aims to support social innovators, technology experts and data scientists to collaborate with law enforcement and civil society on innovative approaches to tackling corruption. We believe that in future, technological innovation and social media will increasingly become essential tools in the fight against corruption given their proven potential to reduce opportunities for wrongdoing, empower citizens to highlight illegal practices, and enhance government transparency and accountability. While media and technology will not be the ultimate panacea by themselves, when fortified with well-intentioned complimentary policy reforms, they can make a significant contribution to the fight for good governance,” he explained.

Yesterday’s conference saw world leaders vow to double down on what UK Prime Minister David Cameron dubbed the “cancer” of corruption – however only a handful of countries announced firm measures. Following the meeting at London’s Lancaster House yesterday, leaders made a number of promises to increase transparency, fight bribery and bring the corrupt to justice.