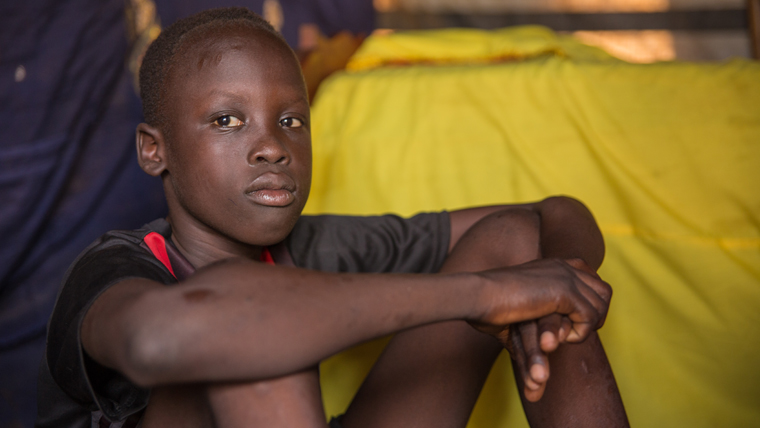 Ayman* waved his parents goodbye as the small boat left the shore and started floating down the river. Sitting on a wooden bench with his two younger brothers and younger sister, he wondered if he’d ever return.

Just a few nights before, fighting had erupted in his village and while many ran away, a number of people fell to the bullets. At just 14 years, Ayman hadn’t seen anything like it before, although he had heard of violence in nearby villages.

“We ran to the river to hide and stayed there all night,” he remembers. “When the fighting had stopped, my parents decided to send us to live with my aunt in Juba, where they said we would be save.

A year later, Ayman still finds himself squeezed into a tiny tent with his siblings, cousins and aunt at one of Juba’s protection of civilian sites (PoC). When he arrived the previous year, registrations at the PoC had already closed and he had no choice but to join the thousands of unregistered IDPs at the site, sharing a tent with his registered relatives, but ineligible to receive food rations.

“Being here still makes me sad. My best memories are from my home in Unity. Here in Juba, I miss my parents and I’m not doing well,” the now 15-year-old recalls.

Ayman and his siblings are considered unaccompanied minors at the IDP site, but Samah*, their 28-year-old aunt has taken them in. 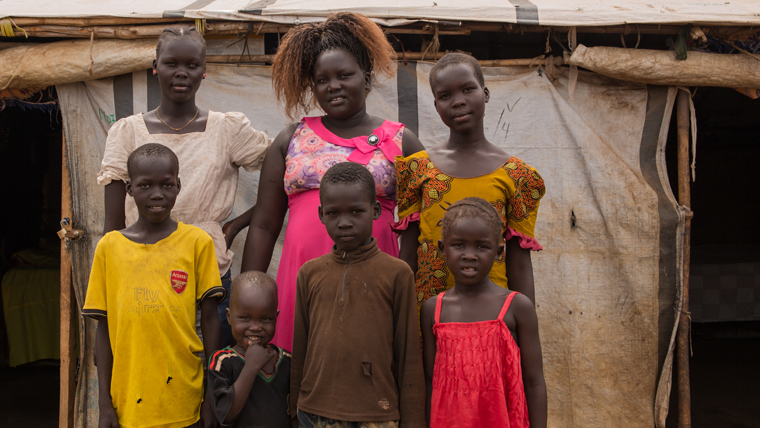 “They are my husband’s brother’s children, so they are my responsibility as well,” Samah says, holding her four-year-old son on her lap. She’s made the little tent look confortable for the family, with dark blue fabric hanging from the ceiling and posters covering the walls. “My husband is still in Unity and I don’t know if he will join us here in Juba,” she explains.

Just a few years ago, little Dilek* was her only responsibility; now she takes care of seven people in total, including two of her own sisters. “We don’t have much space, but what is worse is that we definitely don’t have enough food for everyone,” she says.

With only three members of the household officially registered at the PoC, they receive 45 kilograms of sorghum each month; not nearly enough to feed the whole family.

Samah collects and sells firewood to add to the family’s income, but over the past months, she’s felt increasingly uncomfortable. “I have to leave the PoC in order to get the wood, but the area where I’m collecting it is no longer safe. I’ve heard of many rapes and assaults and, if I could provide for my family in a different way, I’d rather do that,” she explains.

The additional money she makes helps her buy onions and okra that she mixes with the sorghum.

“Life at the PoC is still safer than it is back home, but I miss my family and my husband,” the young mother says. “I have so much responsibility here.”

The family has contemplated going back numerous times, but on-going violence has made the move impossible.

Ayman sits on the floor, listening to his aunt. He has recently started attending classes here at the PoC and now knows how to read and write.

“I’m in primary school and one day, if I can, I’d like to be president,” he says confidentially.  “As president, I would give all people the same rights and treat them equally. To me, that is most important about justice.”

*Names have been changed to protect identities