While Somalia is struggling with an on-setting famine, the country is, at the same time, fighting another silent killer. According to the World Health Organization, one person contracts tuberculosis every 40 minutes, which – with a population of about 11 million – makes Somalia the country with the world’s most TB cases – and deaths. 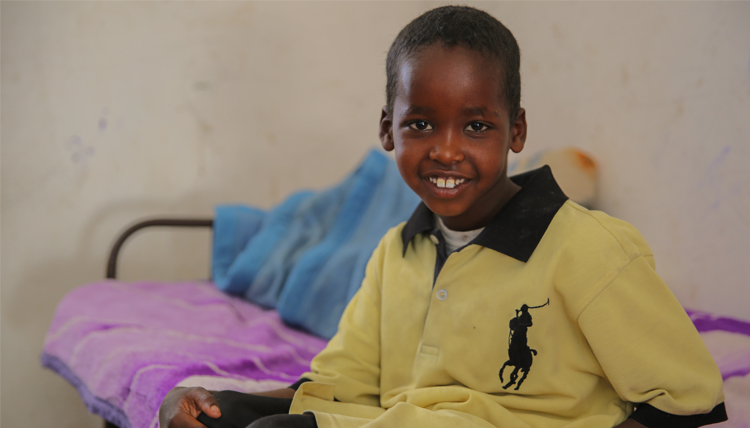 Eight year-old Molit is one of the children who has contracted the bacterial infection. Dressed in an oversized yellow t-shirt and black shorts, he sits patiently between his parents and his little brother Ali, all of whom have been infected.

“We wait here every morning to take out medication,” he says, surrounded by not only his family, but many other TB patients who have arrived at the hospital for treatment. “The pills are big and I don’t like taking them, but I know they will make me healthy again,” he adds. Even four-year-old Ali now swallows the pills confidently – the treatment has become an accepted routine for him.

Molit’s family has walked several days from their rural village to the hospital. Saîd, the eight-year-old’s father already suspected TB. “We would never be able to afford treatment, but we heard that we might receive free healthcare, so it was worth the risk,” he explains. “Ever since we’ve arrived here and our test results were positive, we have been cared for well. For the past two months, we have been living in the hospital, and we will be here until our treatment is completed.”

World Vision has been working in Somalia since 1992 and has seen increasing achievement in the treatment of TB.“We have a success rate of 88% and, in the past year, have even successfully treated 240 cases of multi-drug-resistant TB,” explains Dr. Hergeye, the hospital’s leading physician.

Molit is just one of the many boys who is being treated by Dr. Hergeye and is now slowly on the mend. “Many children have already left the hospital, because they are healthy again. I hope I can go home soon, too,” he says.

His initial journey has been filled with fear. It was several months ago, when Molit first started coughing. After weeks of feeling unwell, both him and his brother Ali developed a fever. “I was very scared. People in my village sometimes die and with my cough, I thought I could be next.” With barely any food in the house due to failed rain and increasing prices in the market, Molit’s father quickly decided that going to the hospital would be the children’s only chance of survival. He didn’t then know that both he and his wife had also contracted the disease.

“We walked for hours and also took a bus. It was a difficult journey for the children, but I knew it would be worth it. Ever since our arrival, we have been given shelter, food, and medical treatment.”

Dr. Hargeye knows that many people walk far distances to get to hospitals. “That’s why we want to expand our work here with World Vision. Instead of only treating patients at the hospital, we want to go into the village and find more TB-cases through screening processes. It’s all about being proactive.”

In the past months, food levels have fallen to a critical low across the country, prompting fears of a repeat of the 2011 famine. Dr. Hargeye is aware of  people’s looming fears.

Now, as families struggle to find food, they will become even weaker and more receptive to catching viruses. That’s why our work here – and additional emergency intervention – is crucial to save lives throughout the country.

Children’s lives are in extreme danger. We urgently need your help.