Matthieu lives in the Grand Kasais – a collection of five provinces in the center of the Democratic Republic of the Congo. The region is incredibly poor, but was previously peaceful. Conflict between a local hereditary leader and the government spiraled into widespread violence in August 2016, which also led to a rise in ethnic militias. In the course of a year, around 1.6 million people fled their homes. This is Matthieu’s story.

My name is Matthieu. I’m 13 years old, and I was in 5th grade before the crisis. I have a five-year-old sister and a little brother who’s seven. My oldest brother was killed in the conflict.

A lot has happened in my country and in my family over the past ten months. 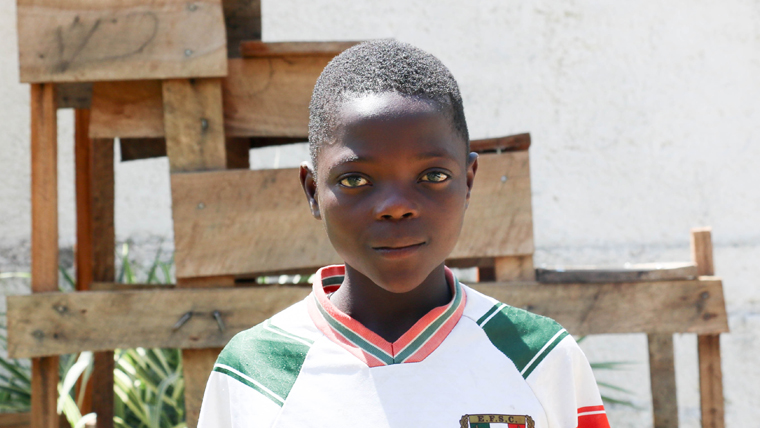 We used to live near Tshikapa, in Kasai Province. But the armed groups came to our village to fight. When our dad tried to come home some of the men with guns shot him, and when we tried to flee one of the armed groups stopped us and told us we were the kinds of Congolese they were trying to kill.

We had to just pick a direction and flee. We headed for our grandmother’s house. We suffered a lot on the way – armed men kept stopping us. If we ran across people from one armed group, they accused us of being militia and would kill us. If we saw men with guns on the road they would think we were the other group or militia and they would kill us too.

I was carrying my little sister on my back; I ran into the forest until I got to the river Kasai. My big brother was killed, and my Mum fled with my little brother.

Along the way we met another family, and together we made it to a village on the outskirts of Kananga, in Kasai Centrale. But it all started again when we got there. My new friends tried to get me to join the militia, but I told them my mum wouldn’t let me.

One day my friend came over to our new home and told me to join the militia, that I could find joy there. I was really sad – my friend didn’t exist anymore, they’d already killed him.

One Wednesday, soldiers confronted the militia in the village market. We fled towards the house, my little brother and me, but unfortunately as we fled a stray bullet hit him in the thigh and he fell to the ground. Someone else’s mother came and helped us to the house.

My mum was in the forest while all this was going on; she’d hidden when all the fighting started. The militia members had come and tried to kill her. One of them wanted to make my mum his wife, and his rivals wanted to decapitate her. Mum begged on her knees for them to let her go.

We finally found each other again and headed to another village, where we stayed with the pastor. My little brother had to go to the hospital, but his leg is ok again now. This is all the suffering that I lived through during the conflict last year.

Peace, of a kind

I don’t talk to children who were in the militias after they tried to get me to join. Some come to the field to play, but they never stay for long because the men with guns are still searching for them to kill them.

The boy who used to be my friend is among them. He keeps getting skinnier and skinnier and he’s manic now. The militia members don’t like seeing me since I refused to join them. Between the different armed groups and men with guns, the rest of us have spent the past year in misery.

To avoid further conflict, we can’t be brutal or violent; we must have goodwill towards everyone. We need good character, and we all need to put away bad morals. Children need to study and play again.

Parents should work, and maybe work will also help them forget all the atrocities that we’ve experienced. Like my mum, for example – she sells flour now, and tries to earn enough to take care of us.

There are things that can be done to avoid war – we need to avoid traditional magic and sorcery, and act wisely. We need to be open to other points of view, and be vigilant about people who might try to cause trouble. I’m Christian – I didn’t know witchcraft existed before we had all these troubles with the armed groups.

For my own future, I’m always telling my mum that I want to study and become a lawyer. Right now, I’m not going to school. Sometimes my mum asks me to help her in the field and I go to help. Other days I just stay home. But one day I want to be able to fight for people’s rights in court.

World Vision has been providing emergency assistance in the wake of the conflict that broke out in the Kasais. So far, we've reached 100,000 people with food assistance, education, and psychosocial interventions in the past four months.