As told to Mark Nonkes

Par is the head teacher of a World Vision-built school in Kakuma refugee camp. A South Sudanese citizen who left his country for a better life in Kenya. He’s guiding 4,800 primary school students through their education.

This is his story, in his own words.

“I was born in 1989, the same year my father was killed. I was in the womb. That’s why I was called Par. Par means crying after a father’s death. I had two older brothers. I grew up as a cow boy. A cow boy is somebody who herds cows, who takes care of the animals. Our family had 15 cows.

“After my father died, my mother had three other children. In 1996, my mother thought we should go to school. She took us to northern Sudan. We sold all our belongings and went for three years. I studied in Khartoum.

“However, more death in the family forced us to return to our homeland in South Sudan. My older brother was bitten by a scorpion and died. Another older brother died from sickness. I was suddenly the oldest boy at home. I returned to the struggle of life as a cow boy.

“By the time I was 14, I realized I needed to take charge and be responsible. I had to make sure my younger brother, sisters and my mother would survive. 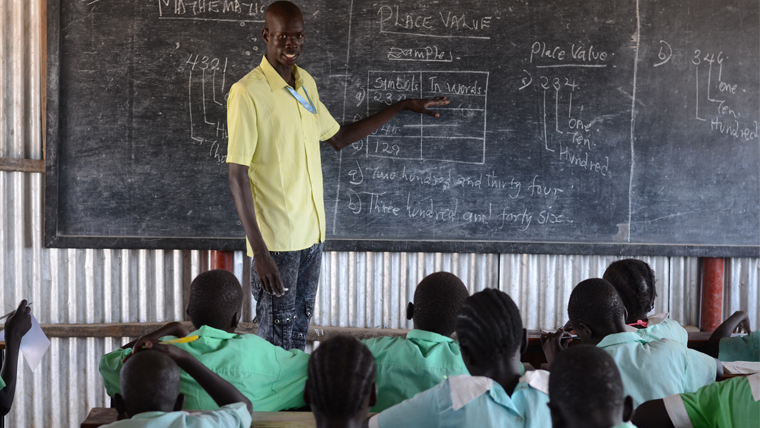 “In 2004, our village received food aid. The organization said they were willing to take some children to study. I threw myself into their airplane when I heard that. I didn’t even tell my mother I was going. I left with 12 other boys.

“We were brought here to Kakuma Refugee Camp. We stayed at the camp as unaccompanied minors. We struggled every day – getting food, cooking, fetching water – everything we do, we do by ourselves. There was nobody to take care of us.

“That’s when I started my education. I started in Grade 3 and I continued to Grade 8. I started secondary school in 2011. In 2012, my uncle sent me money, so I was able to join a boarding school. But the money ran out after two years, and I returned to Kakuma for my final year of secondary school.

“In 2014, in my final year of secondary school, three things happened. I was enrolled late and missed the first term. I was given subjects I had no interest in. Then when the exams came, I was forced to write subjects I didn’t study. I failed – I got a D. In the same year, my mother sent me a wife from South Sudan. We were married. Now I have a baby boy.

“That same year, I started volunteering to teach math at this primary school.

“I taught Class 5, 7 and 8 math. A year later, in March of 2015, the head teacher called me. He told me to come and continue. ‘The learners love you, they say you are good’, I was told. And then they started to pay me a little.

“Each day, I would stay in the class until 9pm with students. I would read with them and practice math with them. We would remain as the last ones at the school and lock the gate when we left. At the end of the year, my top student had the highest mark in math from the entire refugee camp – among all the schools.

“I think the students like me because they see themselves. I’m a refugee and from South Sudan, like most of them. I understand what they have experienced. My younger brother was shot in the conflict earlier this year and is still injured. My family is affected by a lack of food – sometimes they go two or three days without eating. I try to help them by sending them a bit of my salary each month. 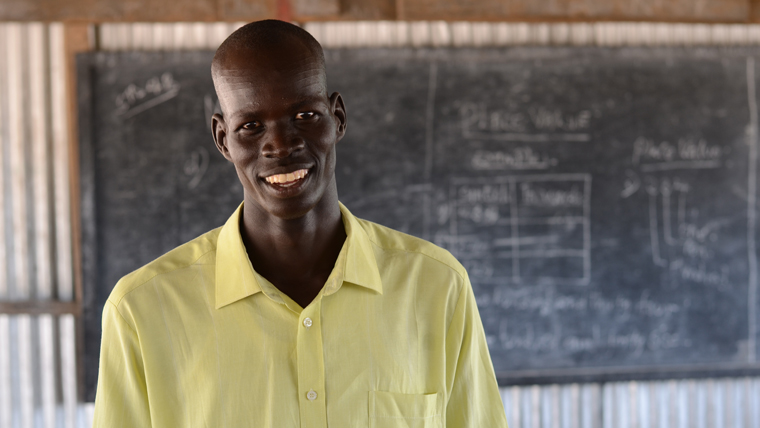 “My goal is to help these students. Many South Sudanese enroll in school here, but they’re scarred by the past. Children arrive and they’ve lost a parent or sibling. They’ve witnessed gun fighting and other horrors. It takes a long time for them to let go of that hostility and be able to focus on their education. My main fight is to unite them, to create a culture of peace among them within the school. I urge them to commit to their education because it will help them in their future.

“You know, I never dreamed of becoming a teacher but this path called me. I love teaching. You become a psychologist in part. You study people and get to understand their lives. You help them problem solve. You get them focused on their education. 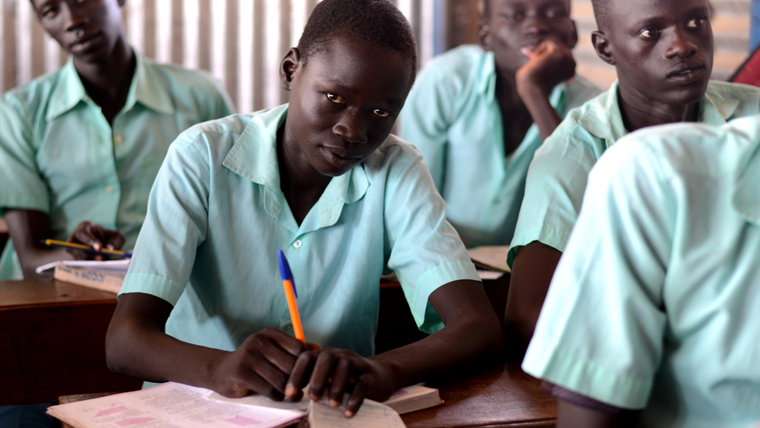 “We have had a very big improvement in student's performance. For example, most students are now able to speak in English and Kiswahili. As well, the number of students who are performing well on their exams is improving. In 2015, the best mark was 325 and in 2016, the best mark was 374. In mathematics, our learners are getting the highest marks in the whole camp. These are true indicators that learning is taking place.

“When you get to see students succeed, their minds and thoughts open up, that’s an great thing to be part of.”

Find out more about our work with South Sudanese Refugees.