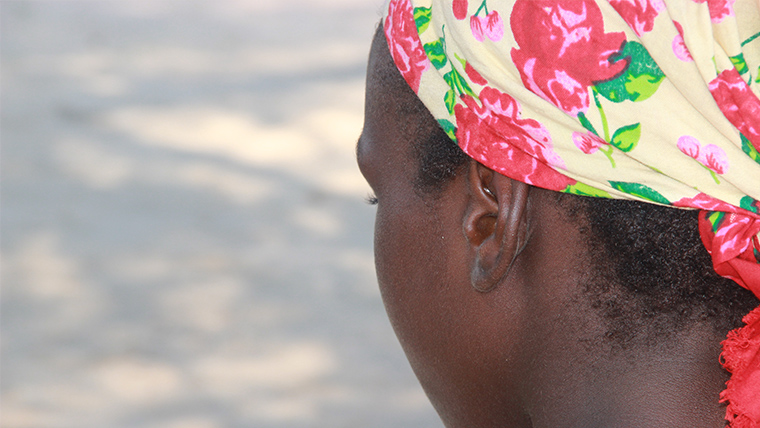 When El Nino brought drought to 14-year-old Inês’ village in southern Mozambique, her mother found it increasingly difficult to provide for all three of her daughters. Where once she’d dreamed of becoming a teacher, Inês found herself married off to an older man…

When Inês’ father died her mother, Alzira, was left supporting three children on a very small income in a drought-affected area of southern Mozambique. As crops failed and food became scarce, it was increasingly difficult for her mum to support Inês and her younger sisters - Cecilia, five, and Laura, eight.

One day a local man knocked on their door asking if he could marry Inês. The lure of leaving a life of hunger and hardship was too much for the family to turn down. In exchange for the equivalent of £27 the family agreed to the marriage.

“My aunt urged me to marry a man who could take care of me,” Inês explained.

In times of crisis, child marriage can often become a coping strategy for parents who are struggling to provide food for their families. A recent report* looking at the affect of El Nino found a steep rise in school dropouts. Hunger and a lack of adequate food was the most commonly cited reason for school drop-outs, the second most common reason was child marriage.

Inês felt as if she had no choice but to accept her family’s decision. At 13-years-old, she left school.

“I didn’t want to marry. I wanted to go to school,” she recalls.

After just a few months of marriage, Inês’ husband started to become abusive. She ran away for her own safety.

“One morning, I went out to burn wood for charcoal that would be sold at the market. When I returned home, my husband was drunk and he beat me,” Inês recalled.

Inês returned to her family home at a time when the climatic effects of El Nino were worsening in her village. The drought had forced her mum to relocate to the capital city of Maputo to find a job, and Cecilia and Laura had been left in the care of a neighbour who was also struggling to make ends meet. Alzira sends money home to her children every month, but it’s never enough to properly provide for them.

Inês decided to follow her mum to Maputo where she found work as a housekeeper. She earned the equivalent of £13 a month, which she sent home to help pay for her siblings’ needs.

The sense of responsibility weighs heavily on her young shoulders.

“I have to help my mother because I cannot take it anymore. We have been begging for food in our neighbourhood. I worked taking care of children and selling second-hand clothes for another family,” Inês says.

In Southern Mozambique, officials say that numbers of children abandoning school due to El Nino are increasing. 700 children were originally enrolled at the primary school in Inês’ village. Around 40 children stopped studying due to a lack of food and water. More recently, another 12 students dropped out for the same reasons.

Feliciano Novela, Headmaster of the village’s primary school, explained to me that the effects of El Nino are causing school attendance figures to drop. Many children are unable to walk the long distances to school on an empty stomach.

“If we look back at the years prior to the recent drought, enrolment had actually increased. This year it’s been the opposite - the number is dropping,” he says. “Even those children who still attend have irregular attendance due to hunger. Children may come today and then stay at home for four or five days.”

An estimated 1.5 million people in Mozambique are suffering from the impacts of El Nino, which are expected to worsen in the coming months. World Vision is distributing cereal and vegetable seeds in an effort to restore drought-ravaged community crops in Inês’ province – one of the worst hit regions of the country. We are also drilling and rehabilitating around 30 boreholes to provide water for families and livestock in the region. You can help provide water and aid mother’s like Alzira earn enough to support their families by donating to our El Nino Crisis Appeal »

Test verify the blog as per ticket 6310 in live