Resilience and hope: Syrian children in education in Jordan 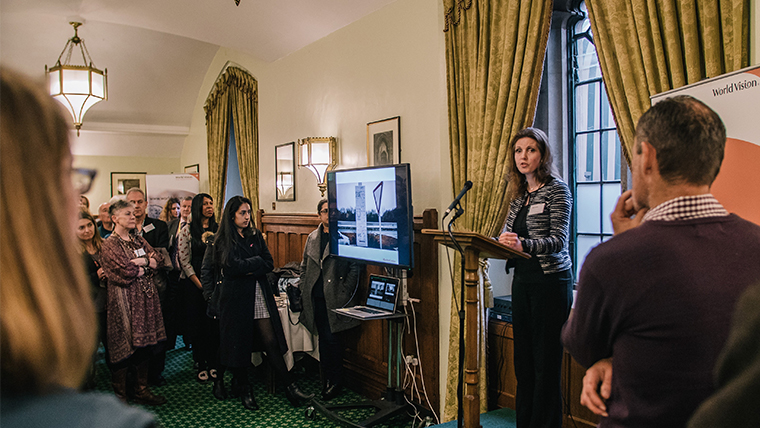 World Vision Supporter Kate Jinadu addressed our event in the UK Parliament last week, speaking about the devastating effect the Syrian war has had on education. Here, she gives her reflections on a recent trip to Jordan, where she got to see some of our remedial classes that are helping child refugees reconnect with education…

The opportunity to travel with World Vision and visit some of Syria’s refugees living in Jordan was a real privilege. I went not as politician, journalist or aid worker, but as a mother and an educator.

The daughter of the first family I met had the same name as my daughter Zoe, and was almost the same age. I felt a strong connection with her mother, I saw the same concerns in her eyes. Every parent wants the best for their children.

As we talked with Zoe’s mother, there was an overwhelming sense that securing a future for her children was a bigger priority for her than securing the essentials for everyday life.

"Passports are expensive, and we go without so we can pay for the future," she said.

Children like Zoe make up over 50% of refugees in Jordan and providing for their education is a huge task for the country. I visited remedial classes established by World Vision, which take place in the same local school buildings as normal classes, but after the Jordanian school day has ended. The schools in Jordan cannot manage the large numbers of refugee children and the remedial classes are providing much needed education for many Syrian pupils. 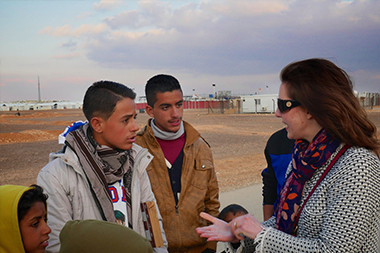 The World Vision run classes are helping children to learn English, Arabic and maths. They also teach lessons about confidence, self-esteem and children's rights. Posters around the school reinforce these positive messages, stating - "I have the right for my views to be heard. I have the right to be respected, to receive proper care so that I can learn well.”

I found these posters very moving; it’s often during wartime that the rights of the most vulnerable are the first to be trampled on.

The children I saw were really enjoying their classes and having lots of fun. Teachers were finding ways to engage a spread of ages (7-16 ) where some had missed up to five years of school. We saw English being taught using puppets and role-play.

"My English is really improving in these lessons; my maths is improving too," said one girl I spoke to. She told me she never used to volunteer answers, but now had gained the confidence to raise her hand and speak up.

There are up to 50 children in normal Jordanian school classrooms, but these special second shift classes were much smaller and the learning was more targeted. Fresh graduates are recruited to teach them, and they receive training from the Ministry of Education. All the teachers in the remedial school were employed and overseen by World Vision and I understood that the classes I was visiting would only be available for a finite amount of time, and would be ending in March, when funding was due to dry up and other needs take priority.

In a class that was exclusively for girls, I spotted one boy - twelve-year-old Abdul. He had missed five years of schooling while his parents were waiting to return to Syria.

“Abdul was always top of his class in Syria,” said his teacher, “he has to do a lot to catch up, but here he is learning fast.” 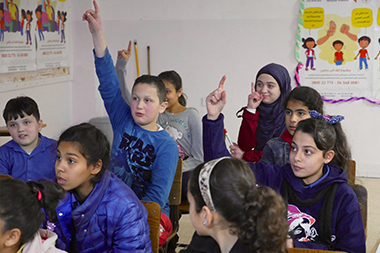 I asked the children what they liked most about the remedial classes. "Teachers in remedial classes are not the same as school teachers. They teach differently and we find it better," was the unanimous verdict.

Spending the majority of my time observing the children of Syria, I could only come away feeling hopeful in the face of such a terrible crisis. I met children trying to adapt to their new ‘normal’ and taking full advantage of every opportunity given to them. I felt humbled by the work of World Vision, who were providing so expertly for the needs of children who could only benefit enormously from their projects.

It is true that Syrian families and communities feel powerless in their plight to secure a happy and fulfilling future for their own children. But what an opportunity for the global family, to share with the Syrian people the responsibility of their children's future. To provide for the education of such incredible, resilient and hopeful children is an enormous privilege. To secure their freedom, their safety and equip them to fulfill their potential, that is our exciting task.

Wednesday’s event at the Houses of Parliament provided an incredible opportunity to hear personal stories of the conflict from those who had visited refugees in Serbia and Jordan, to acknowledge the enormous contribution of World Vision in these areas and to understand the impact of the situation on Syria’s neighbours.

MPs, World Vision staff and supporters gathered to reflect on a crisis that has so largely affected children. Children have been at the centre of this crisis because they have been an exploding demographic within Syria, and let us not forget that it was children writing pro-democratic slogans on the walls of their school that sparked the initial uprisings. But the sheer quantity of child refugees places a huge burden on the neighbouring countries that are receiving them. Sanaa Maalouf, the Advocacy Manager for World Vision Lebanon, spoke of the negative impact on GDP that the crisis has had on Syria, Lebanon and other neighbouring host countries.

Children require societal investment. They don’t contribute to the economy and the danger is that many are being forced to work because the investment in their education and future has not been provided. But I came away from the event last week encouraged that these many voices would be heard, investment would come and that education for the children of Syria would rise to the top of the international agenda.

The majority of our work in Jordan is now in host communities. In addition to remedial education for children, our work includes distribution of food, water vouchers and winter items, and child and adolescent friendly spaces for Syrian refugees and vulnerable Jordanian families. Kate recently visited many of these projects as part of World Vision UK’s Barefoot Coatless campaign. You can find out more about the refugee crisis appeal here »

Here we meet Paska, an extraordinary girl, who has become carer to her three younger siblings at the age of just 11.
Give