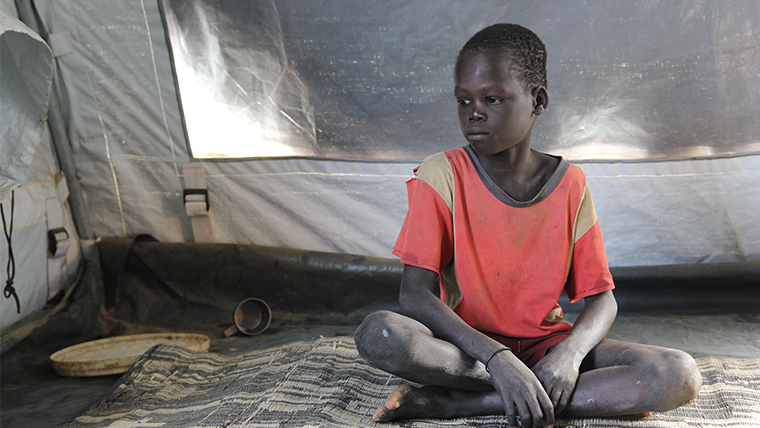 South Sudan marks its 5th anniversary of independence today, on 9 July. However, the young nation faces many challenges and fresh fighting erupted in and around the capital in the past days. Children continue to suffer the most, as many have lost family members over the years and have fled their homes.

Everything looks peaceful as the sun rises over the camp. The white tents are lined up perfectly and the first rays of the day are warming the red soil. It’s quiet besides a few chirping birds and a baby crying in the distance. Smoke rises above the tents, as families start their day by boiling water over an open fire.

Smoke and fire are also part of the reason why many children now live in the camp and it’s a reminder of an ugly past; their home villages were brutally attacked by rebels, their houses went up in flames. Many boys and girls fled the attackers and their weapons in the middle of the night. A quick look over the shoulder confirmed what was left of their once peaceful communities - thick clouds of smoke.

As South Sudan approaches five years since the country’s independence this July, security continues to be fragile and fighting sporadically erupts throughout the country and recently in the capital Juba - much to the despair of children like nine-year-old Kai, who lost his father to the rebels and lives in an empty tent in one of the country’s many camps for internally displaced people (IDP).

Visiting Kai from the capital Juba is a journey. It starts by boarding an hour’s flight at the international airport, where old plane wrecks from previous crashes are still scattered across the fields next to the runway - always a reassuring sign when boarding a small jet. Once in Wau, a town located north-west of Juba, the trip continues on for another six hours by road. Many parts of South Sudan aren’t easily accessible and flights often run on a weekly basis only, which poses a challenge to aid deliveries.

When the conflict erupted in 2013, Kai had no choice but to leave everything behind. Almost three years on, he still hasn’t processed the loss of his father. The first time he spoke about him, the nine-year-old went quiet after just one sentence. Sitting behind him, his mother and sister had tears in their eyes.

“He died,” Kai said, and that’s when the tears started rolling down his face quietly. For his age, he has seen more than any child ever should. “We might have to leave and run again at any time,” he says. Kai lives in daily fear of another outbreak of the conflict.

“I hate that I lost my father. The guns were close to my house, and they hit him. My grandmother died too.” Today Kai is settled in his camp, but his situation is far from stable. “I want to stop running,” he explains, playing nervously with his hands.

Kai has received some help. His family has a big tent, a new borehole provides clean water and his family also receives flour for making bread. “In South Sudan, we help keep children alive,” a World Vision staff member explains. That’s how raw and fragile the situation still is.

The camp’s peaceful mornings soon turn into busy days. Once the sun is out, the heat pierces through every tent, making it almost unbearable to stay inside. There is no cover from the scorching sun, but it doesn’t seem to matter to the kids. Games of marbles and football commence early, while many of the women walk to the nearby town to work. Others collect firewood to sell at the market, while some stay at home to take care of babies. There aren’t many men, as numerous boys and girls have lost their fathers to the conflict. Women and children predominantly settle in the camps.

As Kai is occupied with the new football that World Vision supplied, his mother watches, then remarks, “South Sudan didn’t make the greatest advances in the past five years and insecurity continues to be a big issue here. I have seen suffering and fighting, but I am proud that we have our own country. I am also thankful for the help we are receiving.” She smiles, then walks off to the market for the day, leaving behind the camp that will continue to be her home for the foreseeable future.

World Vision has been working across South Sudan since 1989, but the situation has continued to deteriorate, displacing around 2.2 million people. Since the beginning of 2015 an estimated 13,000 children have been recruited to join the fighting and around 400,000 children are out of school, facing violence, kidnap and malnutrition. Find out how you can help to keep children safe and fed by supporting our work in South Sudan»