Providing aid, while depending on it: Meet Johnson - both a humanitarian and an IDP 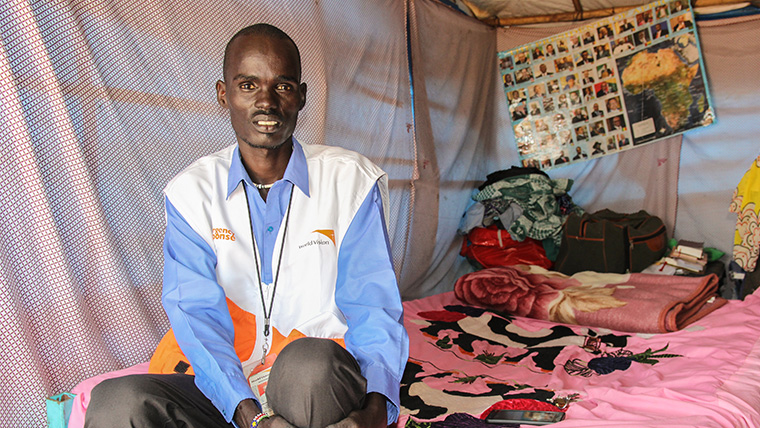 Johnson Kuithoy is both an aid worker and an internally displaced person (IDP) living in a camp. A South Sudanese man in his thirties, he has dedicated his life to providing relief, while he and his family likewise depend on it. Today, on World Humanitarian Day, heroes like Johnson are celebrated…

It all started about 15 years ago, when Johnson realised he was no longer safe in his native country, then Sudan, and for the first time sought refuge in neighbouring Uganda. He has never had a permanent home since.

After years of living in exile, both in Uganda and later in Kenya, Johnson decided to give his home another try, returning to Juba in 2011. South Sudan had just declared independence, officially making it the world’s youngest country. But life didn’t turn out to be easy for him and his family, and in the years that followed, the young couple decided to send their two children to live with their grandparents in Kenya.

“We want to give them a chance and provide them with a future they might not have here in South Sudan,” Johnson explains. “What hurts the most is that I have never met my son, who is now almost three years old. I was working in the north of the country when he was born, and he left for Kenya with my wife’s parents soon after.”

Today, the couple lives in one of Juba’s protected civilian sites. They have a small tent, furnished with a bed and several chairs, and suitcases filled with all of their belongings. Space is limited, as an estimated 30,000 people share their living space here on the outskirts of the capital.

“I really thought that things would get better, especially when we signed a peace deal last year. I thought there would be better education and better chances for children. I now realise that people are still fighting and running away; that’s the reason why I also decided to send my children away. The money I make I send to them, so that their future is secured,” he says. 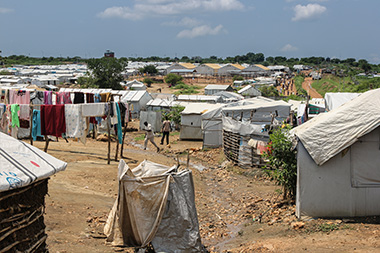 Finding a job wasn’t easy at first, despite Johnson’s degree in business, and it wasn’t until 2014 that he came across a position with World Vision. “The organisation has been providing food and assistance to all registered IDPs at my site. I was hired as their Food and Field Observer and I actually work right outside my front door - here in the camp.”

As a former refugee and now IDP, Johnson truly understands the people he is now providing aid to. “I’m a member of the community and that’s why I know everyone’s needs first-hand,” he says proudly.

Having experienced the same struggles, Johnson is a perfectly equipped aid worker. He could move out of the protected site if he wanted to, but has decided to stay. “I still don’t feel safe in central Juba and while life here is not the easiest, I don’t see another option right now.”

July’s fighting has taken an additional toll on the young man, who used to take classes in the evenings, but is now worried about leaving the protected site. “There is always fear,” he says. “You go out and there is a chance that you get killed. It’s not worth it.”

Working with World Vision has given Johnson hope and he enjoys spending time with his team. “I’m encouraged to work with my colleagues and I know that we are providing lifesaving humanitarian assistance to thousands of families here in South Sudan.”

Johnson is involved in daily food distributions as well as assessments throughout the camp. He works closely together with his team to make sure all IDPs at the site have what they need. Having an income has also helped his family support their children and secure a future for them.

Sitting in his tent with his wife Victoria, Johnson knows that he can now finally meet his son as well, and he is excited: “I have a secure job, and I can save up to visit my boy and my girl in Kenya. I know the day will come soon.”

Aid workers like Johnson Kuithoy are currently working in South Sudan to address growing humanitarian needs; over the last two years numbers of displaced people have risen from 2.2 million to 2.5 million. You can help support their work there by giving to our South Sudan Crisis Appeal. You can also help share the appreciation for humanitarians like Johnson by using #sharehumanity on social media.

In South Sudan, already vulnerable children face a deepening crisis as coronavirus hits their country. Here we meet Paska, an extraordinary girl, who has become carer to her three younger siblings at the age of just 11.
Give