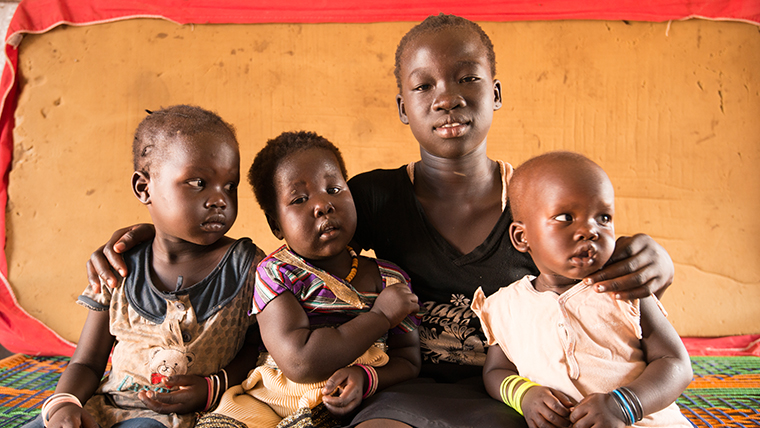 In South Sudan, eleven-year-old Nyahok is one of the lucky ones. Unlike 85% of girls across the country, Nyahok goes to school. Her education is one of the few things that she looks forward to since widespread conflict broke out in December 2013.

Nyahok is originally from Unity state, which has borne the brunt of the conflict. According to the United Nations, over half a million people in the state have been displaced over the past two years. The conflict continues to cause further suffering, preventing aid agencies from reaching the vast numbers of people who need help. Unable to guarantee the safety of staff, we had to suspend operations in Unity in March and have not yet been able to return.

The state capital, Bentiu, was razed to the ground almost two years ago. Too fearful to live in their homes, the population of the town and surrounding villages fled to a camp for displaced people. When the conflict escalated further in March, thousands more people abandoned their homes. In October alone, 6,000 people arrived in the already crowded camp.

“In my village life was good. I stayed with my family and went to school,” says Nyahok.

When her aunt fell sick several months ago, they travelled together in a cargo flight to Juba. But in Juba, life isn’t much better. Nyahok and thousands of others who have left Bentiu still live in a protected camp - or ‘PoC’.

Even Juba isn’t safe. Guarded by UN peacekeepers, Nyahok and her aunt fear that the same violence that they have fled across the country to escape will reach them again.

In the PoC, Nyahok lives with her aunts and cousins – twenty people in total. Their two-roomed shack has been built with wooden poles and tarpaulin donated by an aid organisation. No more than 10 metres square, it is almost identical to the thousands of others in neat rows that stretch towards the horizon of the camp. 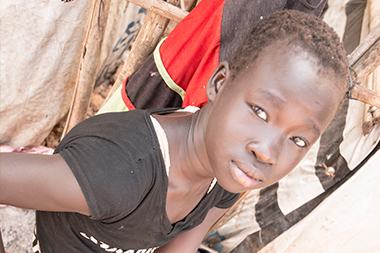 Despite the best efforts of our staff and other organisations, camps like these harbour terrible suffering. The large numbers of new arrivals often mean that there isn’t sufficient food aid to feed everyone at the camp.

“There are always people dying,” she says.

The suffering that these children have faced and continue to face is beyond the imagination of most people living outside South Sudan.

“Life is not good. I am young and I’m not with my family. I miss my parents. It’s not my choice to be here,” Nyahok explains.

Walking through the PoC, children are everywhere. In Nyahok’s family alone, they number four to each adult. Nyahok looks after the three youngest children when she isn’t at school or doing other household chores.

Yet despite the situation, Nyahok still has something to look forward to.

“The best thing here is that I go to school,” she says.

Her education will set her apart in South Sudan, a country where only one in six women can read and write. It also gives her hope and helps her to look forward to the future. Her favourite subject is English and she wants to become ‘a doctor and a leader’ someday.

To realise her dreams, Nyahok needs two things – education and peace. While she is getting an education, she is praying for peace.

“I always pray for peace,” she says.

Conflict in South Sudan has driven widespread displacement and destruction. As of September 2015, eight million people are facing acute food insecurity, of which an estimated four million, or 34 percent of the total population are severely food and nutrition insecure. As part of our ongoing response, World Vision has been improving access to clean water, food and education, so children like Nyahok have a glimmer of hope for their future, despite their circumstances.